Get an instant quote for taxis in Plymouth. Book in a few clicks when you need a cab in and around Plymouth and its University.

Are you a new student at the University of Plymouth, or perhaps thinking of going? Whatever your plans, living in a new city is an exciting and sometimes daunting prospect and it’s a good idea to have access to a trusted cab company in case you ever find yourself off the beaten track, or you simply want to avoid the buses on your night out. ubiCabs can offer that and more! Download our iPhone or android app or check out our website: we compare the cab prices for you, give you the best quote and contact the companies with available cars so you don’t have to. All you have to do is sit back and wait for them to pick you up. 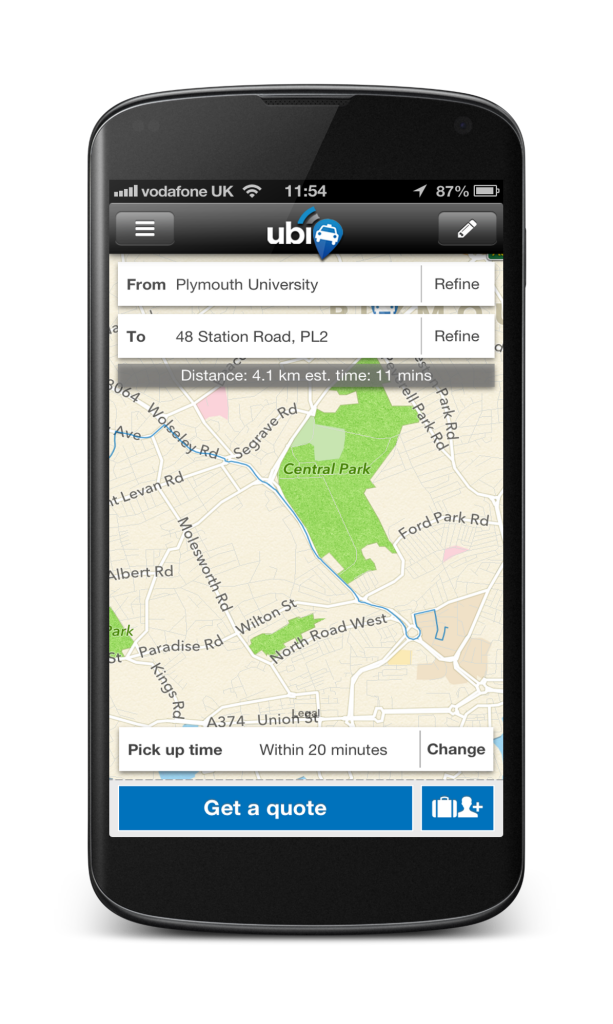 The University of Plymouth

Plymouth University is the largest university in the south-west of England, its population of more than 32,000 students places it ninth in the list of the UK’s largest universities. It was originally a Polytechnic College, covering Plymouth Polytechnic, Rolle College, the Exeter College of Art and Design and Seale-Hayne College. When it gained university status in 1992 it also absorbed the Plymouth School of Maritime Studies and Tavistock College as it began to cement its place as Devon’s leading centre for learning.

Plymouth station links the city centre with Exeter and London Paddington to the east and Penzance to the west, by train. The university main campus is located right next to the station making this method of travel very convenient, if not cheap. Most of the university-owned halls are situated on campus or next door in the student village, however, a few halls of residence such as Alexandra Works and Astor House are a little further afield, and you may like to consider a cab if you’re taking the train with a bag full of books or possessions. Why not use our iPhone or android app or website to book your cab from home or when you’re on the train so that it arrives as you do. Then sit back and wait for your driver to text confirming that he’s outside.

Plymouth also provides a base of operations for Brittany Ferries which runs Ferry services between the the city and Northern France and Spain.

Plymouth has three main bus company competitors as well as a good selection of minicab companies that will get you where you want to go cheaply and quickly.

Plymouth is a popular location for water sports fans, from scuba divers to sailors and has hosted the Plymouth Regatta since 1823. The local football team, Plymouth Argyle, play at Home Park whilst the successful basketball team, the Plymouth Raiders, are based at Plymouth Pavilions Arena and currently compete in the British Basketball League; the top tier of the sport in Britain.

Enjoying your nights out

Plymouth’s large student population means there’s always something going on, whatever day of the week you want to head out. What part of the city you end up in depends on what you’re after: live music, clubs, bars, pubs, restaurants with the most popular areas being the North Hill strip, Mutley Plain, Union Street and the Barbican. Wherever you end up on your night out be aware of how you’re going to get home, if you’ve missed the last bus or feel unsafe then take a licensed taxi or book a minicab. Don’t flag down a minicab as they are not allowed to pick fares up without being pre-booked and may be unsafe. For a safe, reliable and cheap taxi home get a fixed quote from ubiCabs and wait inside for the driver to text saying he’s outside. No waiting around, no fighting for cabs, no dodgy rides, and no drivers demanding £30 after promising £15!