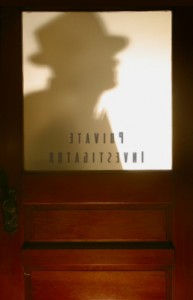 We were holed up in the car, me and my partner, waiting and watching.  Playing the waiting game.  Doing the watching crossword.  My mother always said that you don’t let the obstacles stop you from doing what you have to do.  I’d gotten an estimate for having that phrase tattooed on the inside of my eyelids.  The word count made it unrealistic, so I had it tattooed on my mind instead.

Anyway, the obstacle that I started referring to is this; I have no driver’s licence.  I assume that this is because the police are concerned about the tipping point in the balance between good and evil that my being able to drive a car would represent, and have therefore subliminally prevented me from trying to learn.  I expect they’re like “Whoa, wait, if he gets a driving licence, and starts cleaning up the streets even more, the criminals will escalate and we’ll have an all-out war.”

Well, that’s probably right.  But what they haven’t counted on is that if I get a licence, the criminals will get a Mondeo, but if they get a Mondeo, I’ll get one of those Kia people carriers that comes with a free bike.  I’ll always be a step ahead.

Anyway, again, because I have no driver’s licence, and because at this stage I have no official partner, I find the best crime-fighting transport medium to be a minicab.  Extensive research has shown that crime-fighting from a bus doesn’t reduce offences between stops, while tube transport is fatally flawed against things happening not underground.

So me and my minicab driver were holed up the car, which I’d ubiCabbed earlier while having my shoes shined.  Looking across at him, I could see the driver was a pro.  While I hunkered down low in the seat, he disguised his surveillance behind an open copy of The Sun.

Using my initiative, I leant across and tore a couple of eyeholes in the paper so he wouldn’t have to look over the top.  However, it seems that in doing so I may have irreversibly damaged certain critical aspects of the page, which the driver found stuffed into the ashtray.  It became necessary to terminate the surveillance, but at least I got a lift home, having played my small part in keeping the streets clean for another night.